Turns out it was this past week.

So a couple of weeks ago when I said that Phonogram was coming out, I seemed to be a tad bit off. In actuality it was just going to the printer that week. The delay was no fault of the creative team, as we had the issue done long before it's eventual printing. The issue is out now, and in fact it came out last Wednesday (6/10) in case you're interested in picking it up.

An added note about issue completion, issue 4 is also written, drawn, and colored. So hopefully there won't be any delay in #4's release. The format Kieron has given this issue is certainly interesting, and as I told him, the issue will either thrive or die based on his dialogue because of how he has set up the issue. I think it's another great issue, and I'm sure fans will love it, but I'm really interested to see how it's recieved. Fortunately, Jamie's knack for conveying emotions and character with his drawings will help sell Kieron's vision for this issue. You'll see what I mean when you get the issue.

Anyhow, enough about an issue you won't see for a while and more about issue 3. Here's a link to a 5 page preview, and another page of colored artwork without words... 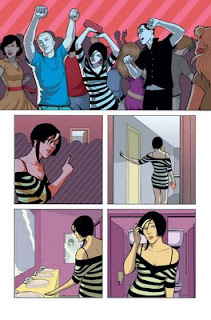