Hope everyone's enjoying the first few days of 2011. I am finding it incredibly hard to get motivated with work.

Roger Langride, Chris Samnee, Matt Wilson and Rus Wooton have collaborated to create a rare gem of a comic, and in their own way managed to subvert the contemporary definition of quality in the superhero genre.

The best introduction to the character since Walt Simonson's run almost three decades ago, Roger Langridge and Chris Samnee turned out to be an ideal match in terms of tone, charm and making this kind of superhero book look easy.

Graeme McMillan from the Robot6 blog has it at 7 in his top 10 and the book is mentioned numerous times by creators as a favorite book in Looking forward, looking back: Creators weigh in on comics in 2010 and 2011 also at Robot6.

My gold medal this year belongs to the unsung masterpiece of modern superhero comics that is Thor: The Mighty Avenger. As I write this, there's only one issue left, and a bigger crime against comics there could never be. Everything about this book is perfect.

Clearly there was an audience out there -- not a big one, mind you, but a passionate one -- for a Thor comic that existed free of the shackles of Marvel Universe continuity and that served not to prop up a larger storyline, but to just tell fun, all-ages stories full of charming characters and wonderful art.

As well as a mention in their Best Writers, Artists, and Series of 2010 video podcast...


The book may be on other lists, but these are the few that I've seen. I'm really glad I was a part of such a special book with some great creators. And looking ahead we still have issue #8 coming to stands in January, and the Free Comic Book Day issue in May.

Speaking of issue #8, Robot6 has an exclusive preview. Click here to check that out! 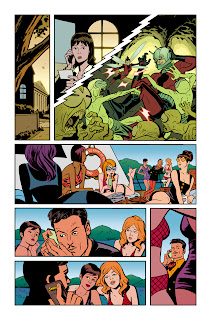 Everytime somebody talks about Sean Gordon Murphy and says "I've never heard of him", Hitler's ghost kills a litter of husky puppies.