Most people that ask what I do for a living, even after I tell them, have no idea what my job actually is. I think that people who have little to no contact with comics don't realize that there are distinct steps that go into making a finished comic. I imagine that these people see the process as this: Person A creates the idea for comic. Person A tells Person B the idea. Person B creates the pictures for the comic. Comic made! (yay) It's a good thing comics aren't made like that because I'm not person A or B, and I wouldn't have a job.

I don't blame people for these misconceptions, or the lack of knowledge about my field. There are plenty of professions that I have no clue about, like taxidermy for example.

So, I decided to use my first art post as a tool that better explains comic coloring. This won't go into the processes that come before coloring like script writing, drawing tumbnails, penciling, inking, or lettering.

Once the black and white page is approved by an editor it is sent to a colorist via the publishers ftp. 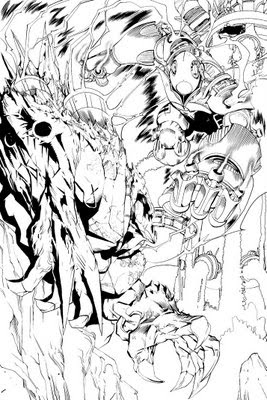 Sometimes a penciler will put notes on a page if the art is unclear, or the colors need to indicate something the black and white art doesn't show, or the penciler wants the page to be colored in a specific way. 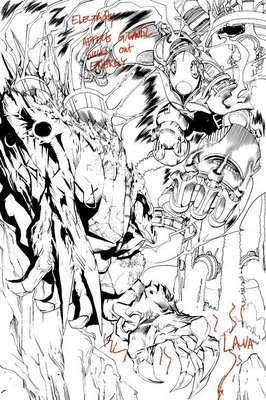 Next the colorist usually flats, separates, or selects the page (all terms that mean the same thing). This step can be done by the colorist, but is often outsourced to another person for a predetermined page rate. By having someone else flat all of the pages the colorist saves time. Instead of having to trace out the drawing they now have shapes they can easily select. 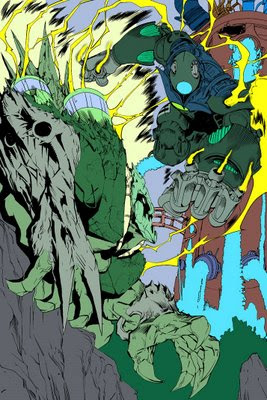 At this point the colors are most likely incorrect, but that's ok because the job of choosing the colors belongs to the colorist. Once the flats are received the colors themselves need to be changed to properly reflect the characters colors and the tone of the scene.

A flatted file with the colors corrected. 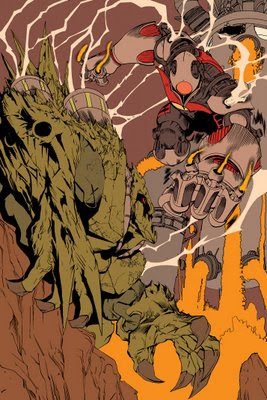 This is a base, and starting point for the final page. The colorist then adds textures, rendering, and special effects to bring the page to life. 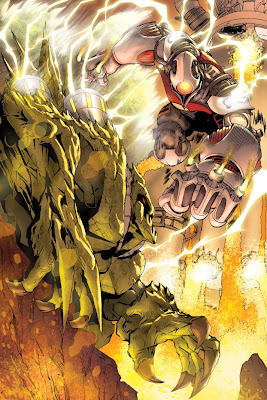 All original art by Eric Nguyen and colors by me.

Now, with all of that said I should mention that this only describes my process. Other colorists may work in a similar fashion but there are many ways to color a page. I didn't get into settings or specific techniques because this post is more of a general demonstration of what a colorist does, and not how they do it.

I hope this was understandable and informative, but if not just pretend it's a Denny's menu and look at the pictures.

M
Posted by Matthew Wilson at 8:46 AM

This is awesome, Matt. I have sort of been dying to ask how one goes about coloring a comic book for a while but never wanted to seem stupid (or as clueless as everyone else). But now I can get rid of the image I had of you with a box of crayons...